User goal / Problem this is trying to solve

The user physically moves around their play area whilst in the VR application.

However when they approach the boundaries of the playable area or the room scale parameters that have been set up, a translucent grid appears to mark the boundary in each direction.

The grid has the appearance of a virtual cage superimposed over the 3D virtual world, warning the user not to venture outside of the cage. 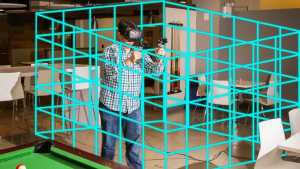 If the user waves a controller too close to the boundary, the boundary markers also appear.

Often there is a visual change in the appearance of the hands or virtual controller if it touches or goes beyond the cage.

When the user moves away from the boundary the cage disappears, so as not to disrupt the VR experience.

A drawback is that some users find the grid to be disruptive to their experience.
Especially if they are in a small area but rarely move enough to leave the playable area.

This can contribute to a break in presence.

Dev mode only shows the boundary markers on the floor.